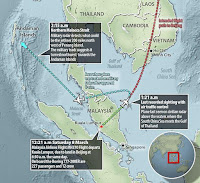 The disappearance of MH370 highlighted a pressing need for aircraft position to be reported and recorded.  It has been announced that the UK Air Traffic Control provider - National Air Traffic Services (NATS) - has taken a 10% stake in USA based Aereon - NATS takes equity stake in Aireon.  It is claimed that this will help accelerate the technology required for global aviation surveillance.

Through a network of 66 low Earth orbiting Iridium® NEXT satellites, AireonSM will monitor the location of Automatic Dependent Surveillance-Broadcast (ADS-B) equipped aircraft flying anywhere in the world, transforming the way air traffic control services are provided.

Read more
Posted by ObiterJ at 01:49 No comments:

This post will be updated to keep abreast of events so please revisit ... Latest update 14 April 2021

Depending on the precise route, this is a flight distance of around 2380 nautical miles and takes approximately 6 hours.  The aircraft would have been expected to reach Beijing by around 22.30 UTC (7th March).

At time 17.19 UTC (7th March) there was a final radio communication between Air Traffic Control and the aircraft.  Details of that communication were, after some delay, released by the Malaysian authorities - see Missing plane: pilots' conversations revealed.

As to who made the final transmission from the aircraft see the report in Telegraph 24th June where it is claimed that the voice was that of the aircraft's captain.